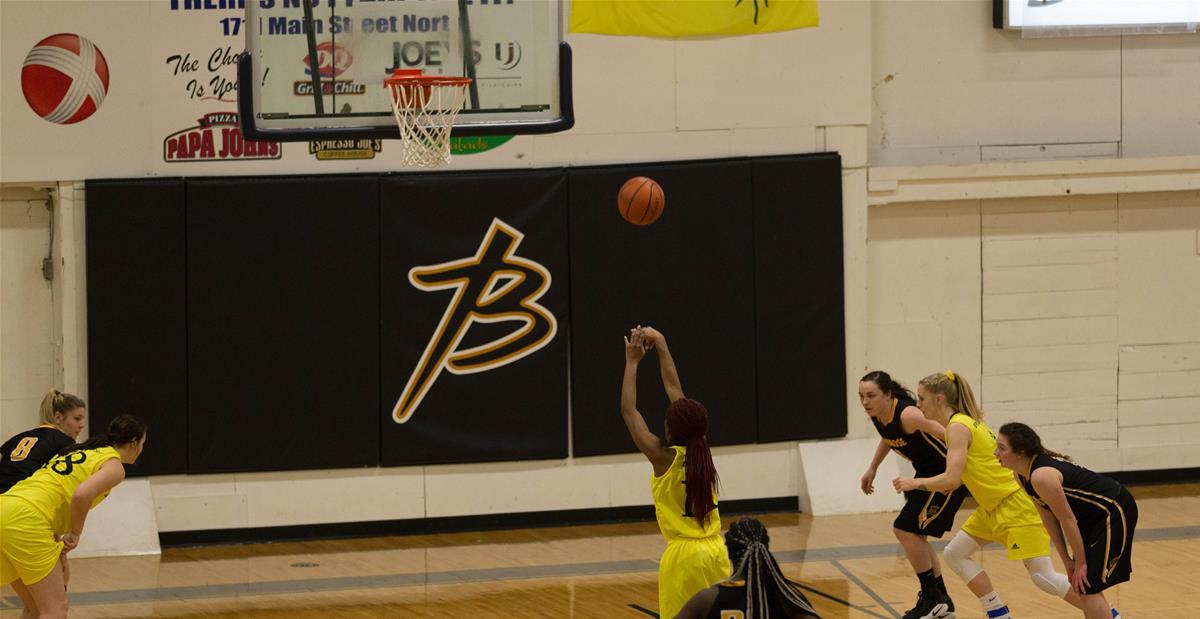 Briercrest basketball teams challenged the Southern Alberta Institute of Technology Friday, January 26. S.A.I.T. took home both games with a 58-46 win for the women, and a 117-78 win for the men.

The women’s game began with the first basket being scored by S.A.I.T. From the very start S.A.I.T. played with an energy and aggression that resulted in many turn-overs for them. However, Briercrest steadily gained on them and saw impressive shots by their players. The first quarter ended with Briercrest leading 13-10.

The second quarter kicked off with S.A.I.T. player Melanie Thera making two solid free throws. Briercrest players showed more aggression in the quarter and were able to display their skilled lay-ups and jump-shots. S.A.I.T. player, Alexa Tan, also demonstrated her team’s ability to shoot when she scored a three-point jump shot, bumping their lead to 18-13. The quarter ended with S.A.I.T. ahead 28-21.

The third quarter started with Briercrest’s Kourtney Kobitz scoring a jump-shot. Kobitz stood out in the quarter due to her impressive shots that furthered her team. S.A.I.T. player Amy Gustavsen also pushed her team forward with her multiple turn-overs and shots. The quarter ended with S.A.I.T. maintaining their lead 44-30.

The fourth quarter became more intense as both teams fought to come out on top. Moriah Williams, for Briercrest, exhibited her drive to win with her suave lay-ups and jump-shots.  S.A.I.T. responded with impressive blocks and continued to make quick steals and turn-overs. After the constant back and fourth, S.A.I.T. took home the win 58-46. S.A.I.T. player of the game was #21 Melanie Thera with 9 points, 11 rebounds, 1 assist, 2 steals, and 3 blocks. Briercrest player of the game was #11 Moriah Williams with 15 points, 3 rebounds, 1 assist, 2 steals, and one block.

The men’s first quarter explosively opened with S.A.I.T. scoring multiple baskets. Briercrest quickly realized the skill level of their competition and brought all their force. Briercrest players were met with multiple lay-ups done by S.A.I.T. and responded by tightening their defense. Dominick Otteni for Briercrest helped his team with his killer three-point shots, but the quarter ended with S.A.I.T. leading 39-19.

The second quarter continued with S.A.I.T. dominating the court and displaying great strategy. Brennan Gardner and Thomas Neustaedter from the Briercrest team paired well and assisted each other in jump-shots that furthered their team. S.A.I.T. players had an aggressive offense that resulted in many shots and finished the quarter off with a 76-38 lead.

The third quarter went by quickly as both teams played to win. Briercrest player Brandon Tolentino made three-point shots that earned him his later given title of player of the game. S.A.I.T. maintained their edge with 92-46 points and ended the quarter with 100-55 for them.

The final quarter saw many well-executed plays done by Briercrest players. They continued to steal, shoot, and wrack up the points, but S.A.I.T. stayed strong in their lead and won the game 117-78. S.A.I.T. player of the game was # 30 Nicholas Molina with 25 points, 5 assists, and 2 steals. Briercrest player of the game was #6 Brandon Tolentino with 20 points, 7 rebounds, 3 assists, 4 steals, and 1 block.