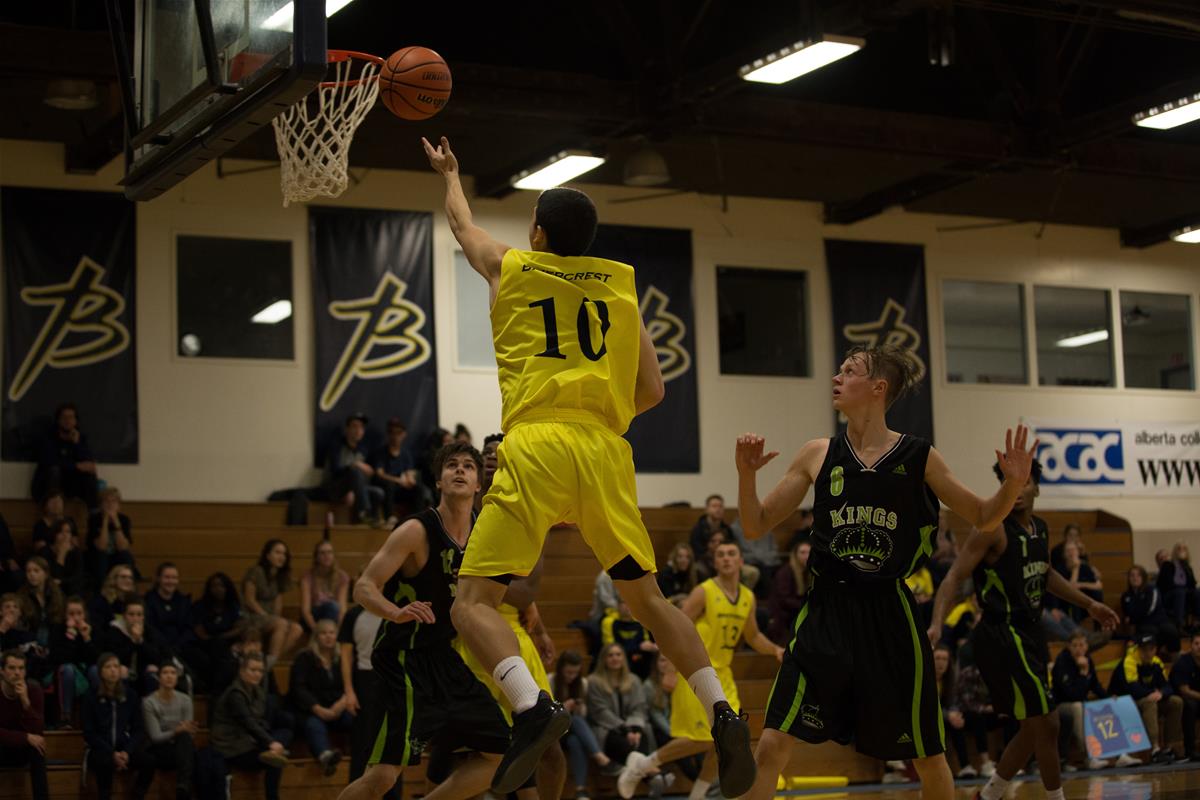 The Saturday games between St. Mary and Briercrest were filled with incredible skill and competition, resulting in a win for both St. Mary’s men’s and women’s team. The women won in an intense overtime 86-84, and the men won 107-87.

The women’s game began with St. Mary sinking the first basket. The proficiency of St. Mary’s shots lead to Briercrest taking a time-out very early into the game. After talking, the Briercrest team came back with sharper plays and an amazing jump-shot done in the last second of the shock clock by Moriah Williams. The quarter ended with St. Mary leading 22-17.

The second quarter brought out the aggression in both teams as they fought to be in the lead. Briercrest player Kourtney Kobitz attacked hard and helped her team tie 31-31 half way through. St. Mary pushed back and finished the quarter 40-38.

St. Mary opened the third quarter with their solid passes that aided them in scoring baskets. Moriah Williams for Briercrest continued to nail shots throughout the quarter and kept the score tight. Both teams felt the pressure and played a solid quarter, but St. Mary that came out with the 60-53 lead.

The women’s final quarter was the most intense of all. Kourtney Kobits on the Briercrest team killed it with her jump-shots and free throws, and the St. Mary women answered back with a tight defense. The teams stayed close in points and tied 76-76 when the final buzzer went off. They went into overtime and both teams began to struggle with their accuracy as they attempted to steal the game. It was a victorious moment for St. Mary when their player, Montana Romeril, scored the winning basket with three seconds left on the clock. St. Mary player of the game was #22 Kassandra Baptiste with 17 points, 7 rebounds, and 1 assist. The Briercrest player of the game was #19 Dionne Martin with 17 points, 8 rebounds, 3 assists, and 1 steal.

The men’s first quarter began with lots of energy and enthusiasm across the court. St. Mary scored the first basket and began the battle that continued throughout the entire game. Briercrest’s Dominick Otteni made beautiful lay-ups that exhibited not only his skill, but also amped his team up. St. Mary’s Mobin Ali showed up for his team and scored baskets with ease. After an exciting first quarter, St. Mary lead 28-21.

The second quarter went by quickly and saw smooth plays by both teams. St. Mary continued to move up in points, but Briercrest kept a close pace behind them. The quarter finished with St. Mary in the lead with 47-40.

The third quarter picked up and saw an array of Briercrest players show their abilities. Briercrest’s Kyle Helsloot and Brian Tolentino both scored multiple baskets, one of which being a dunk by Helsloot. However, the St. Mary men matched their opponent and continued to sink baskets. After a lively quarter, the St. Mary men finished the quarter strong 83-65.