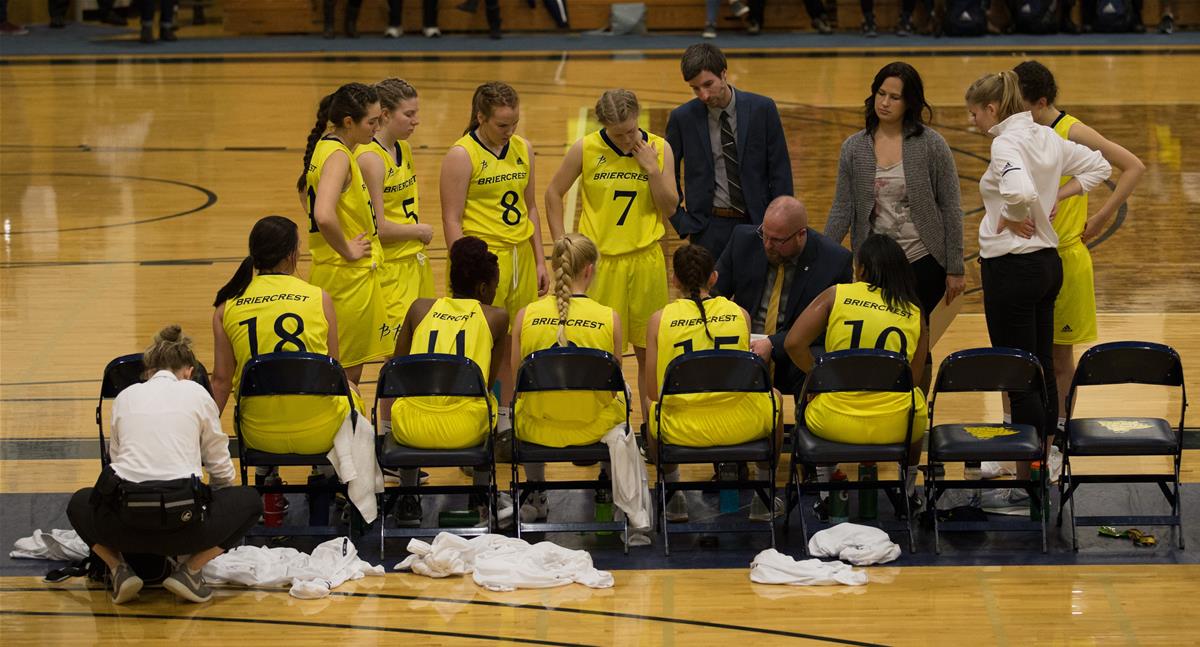 The weekend kicked off with Both Briercrest men’s and women’s basketball teams challenging each other in back-to-back games Friday night. The St. Mary women’s team won in a hard match with 76-52, and the St. Mary men’s team won after lots of fierce competition with 92-86.

The women’s game started with St. Mary scoring two free throws and Briercrest following close behind with two points of their own. Both teams quickly showed their skill by completing solid lay-ups and jump shots. The quarter ended with St. Mary having a 17-8 edge.

The second quarter saw beautiful shots by Briercrest players Kai Wyatt and Dionne Martin as well as a three-point shot by St. Mary player Montana Romeril. St. Mary kept their lead and finished the quarter strong with a 30-17 lead.

The third quarter picked up with St. Mary scoring a basket in the first ten seconds and Briercrest responding with a jump-shot quickly after. St. Mary player, Montana Romeril, stood out with her consistent three-point shots and stealthy turn-overs. The Briercrest women continued to advance in points, but the St. Mary team took the quarter with a 61-32 leading.

The men’s first quarter opened explosively as both teams brought their A-game. The fast paced and high intensity quarter saw jump-shots made by Briercrest player Brian Tolentino, as well as awesome passes by St. Mary’s that resulted in multiple points. St. Mary’s ended the quarter leading 21-15.

Briercrest player Kyle Helsloot started the second quarter off by making his lay-up and starting the moment to bring his team up. Briercrest slowly began to catch up to St. Mary and had a three-point difference that ultimately became Briercrest leading 48-37 at the end of the quarter.

In the third quarter there were multiple turn-overs as the fast-paced game continued. Briercrest player, Dominic Otteni, nailed multiple shots that kept his team in the lead. St. Mary player, Coal Clark, made suave baskets that kept his team afloat and consequently tied the teams 65-65 by the end of the quarter.

The final quarter saw a rise in energy due to the closeness in points that the well-matched teams had. Dominick Otteni and Brian Tolentino, for Briercrest, scored most baskets in the quarter and kept the game tight till the end. Averie Armbrister, for St. Mary, carried his team in the fourth quarter, and with the skill of his other team mates, won the game 92-86. The St. Mary player of the game was #10 Cordell Minnifee and Briercrest player of the game was #7 Dominick Otteni.